US President Donald Trump arrived in Ahmedabad today with his wife Melania Trump for the first leg of his maiden India trip. Prime Minister Narendra Modi welcomed Trump and his family including daughter Ivanka and son-in-law Jared Kushner at the airport. His Gujarat trip includes a 22 km roadshow, visit to the Sabarmati Ashram and a grand event titled ‘Namstey Trump’ at the Motera stadium. Through his trip to Gujarat, Trump will get a taste of India’s cultural potpourri. 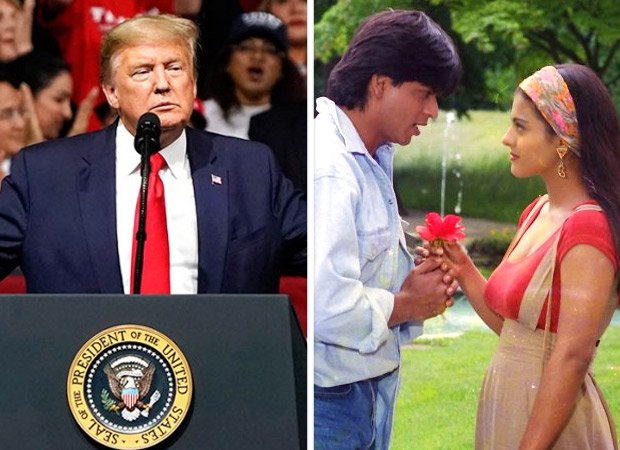 Donald Trump in his speech at the Motera stadium appreciated several aspects of India and its culture. The President even acknowledged the Hindi cinema which is popularly known as Bollywood. He gave a special shout out to DDLJ (Dilwale Dulhania Le Jaayenge) and Sholay. Talking about the influence of Indian art, music, and cinema, he said. “The people take great joy in listening to Bhangra, music, dance, romance and drama and classic films like DDLJ and Sholay. “

DDLJ is one of the most iconic romantic films of Bollywood starring Shah Rukh Khan, Kajol, and Amrish Puri. The film released in 1995 was directed by Aditya Chopra.

Former US President Barack Obama also referred to Dilwale Dulhania Le Jayenge during his India visit in 2015. In broken Hindi, he quoted the iconic dialogue from the film and said, “Senorita, bade bade desho mein… you know what I mean.”