After a two-year-long battle with cancer, veteran actor Rishi Kapoor recently breathed his last. He, accompanied by wife Neetu Kapoor, spent nearly a year in New York, being treated. Kapoor enjoyed unmatched love and respect from the industry and the list of people who visited him during his stay at NYC is rather long. From Shah Rukh Khan, Aamir Khan, Karan Johar to Priyanka Chopra, Deepika Padukone, Vicky Kaushal and many more, stars, as and when they were in the city, would catch up with the late actor and we would keep coming across happy pictures on Neetu Singh’s Instagram. 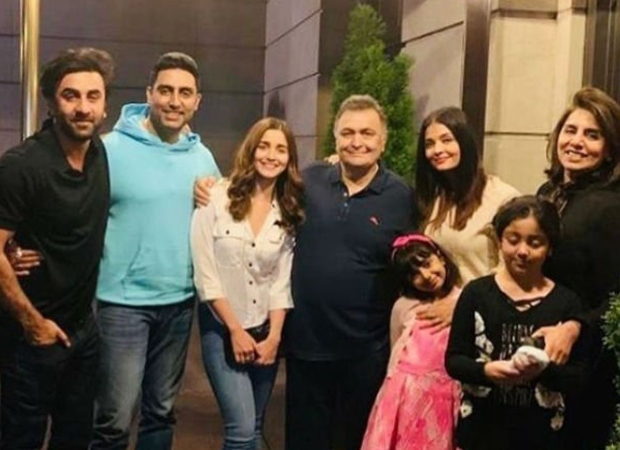 While crawling the internet, we came across this photo of Abhishek Bachchan, Aishwarya Rai Bachchan and daughter Aaradhya Bachchan, posing with Rishi and Neetu, son Ranbir Kapoor, beau Alia Bhatt and Ranbir’s sister Riddhima Kapoor Sahni. We remmeber Abhishek and family dining with the Kapoors at New York, and for those who recollect, Alia would also fly off whenever she could, and also celebrated her Christmas there, with Ranbir and family.

Rishi Kapoor, who reportedly had a relapse of cancer, was admitted to Mumbai’s Sir HN Reliance Foundation hospital, and took his last breath on 30th April.