Get ready to witness double the fun as one of the most celebrated Bollywood actors, Ayushmann Khurrana visits the Sony Entertainment Television’s The Kapil Sharma Show. Both Ayushmann and Jitendra Kumar are on a promotional spree for their upcoming film Shubh Mangal Zyada Saavdhan. Soon they will be seen with co-actors Neena Gupta, Gajraj Rao, Manurishi Chaddha, Sunita Rajwar, and Maanvi Gagroo. Ayushmann shares his moment of kissing a male actor on the big screen for the first time. 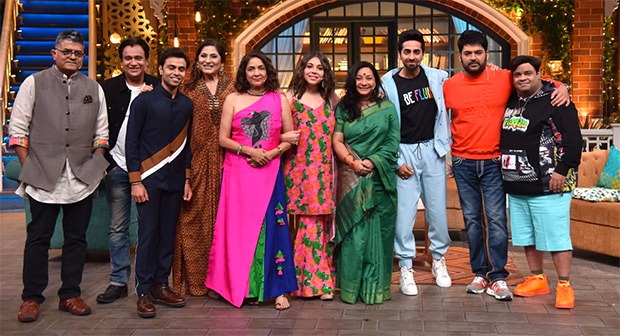 Out of curiosity, Kapil nudged Ayushmann to share his experience of kissing his co-star Jeetendra. Ayushmann said, “As an actor I feel, we have to be ready for such circumstances where we have to kiss anybody anywhere. We have to be prepared for a character’s demand in the film. Above all, to normalize this sensitive topic, it was a necessity to incorporate in the film.” He mentioned that though the supreme court has decriminalized section 377, it is still a taboo.”

Ayushmann adds, “A lot of people say that homosexual relationship isn’t normal. To make them believe and relate to the concept, it was important to incorporate the scene in the film.”

Kapil enquired about some more interesting facts from the artists. Ayushmann confessed that he was addressed as ‘Froggy’ in his childhood by his mom and teacher because he is always high on energy like that of a frog.

Jitendra Kumar also revealed that he posts his shayaris on his social media account under the handle @farjigulzar, as he looks up to Gulzar Saab, who has always been his inspiration.

Shubh Mangal Zyada Saavdhan is set to release on February 21, 2020.