Last week, Bollywood Hungama was the first to put it out that a few intimate scenes in Valentine’s Day release Love Aaj Kal had been butchered by the Central Board of Film Certification (CBFC). This week sees the release of Shubh Mangal Zyada Saavdhan, a gay love story. Moviegoers hence feared that this film too might face some modifications at the hands of the CBFC since it is based on a taboo topic. But they can breathe easy as the CBFC has asked for very little changes, none of which will affect the storyline. 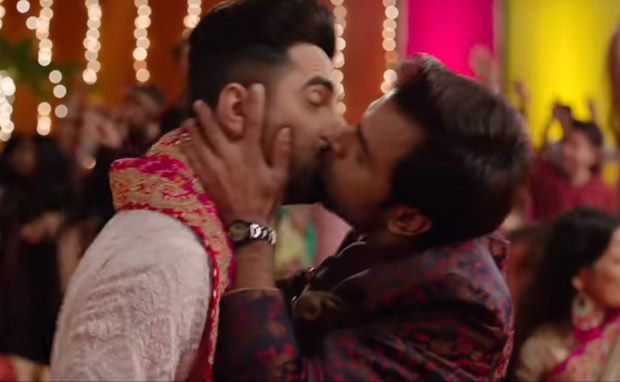 A source close to the project says, “Shubh Mangal Zyada Saavdhan has been awarded a U/A certificate by the Board. There’s a kiss between the homosexual couple in the film, played by Ayushmann Khurrana and Jitendra Kumar. It’s shown in the promos as well but CBFC hasn’t touched it at all. They understood that it was not inserted for the heck of it and besides, it’s not graphic as well. Also, there are several dialogues in the film with regards to homosexuality and homophobia and CBFC has retained all of them. They realized that if any of these aspects are censored, then the purpose of the film will be lost. Also, they liked that the film gets into a bit of a naughty zone but doesn’t make for an uncomfortable watch. As a result, they granted a U/A certificate.”

The changes asked by the CBFC were very minor. “Dialogues referring to violence against women and Malayalis were asked to be changed. An abusive word was snipped and replaced with ‘Bhains ki aankh’. One minor visual of Maanvi Gagroo was also asked to be removed. Finally, Hindi fiction disclaimer and anti-smoking message during the film was asked to be inserted,” says the source.

Shubh Mangal Zyada Saavdhan was awarded the certificate on February 14 and the total length of the film is 1 hours 59 minutes. The makers, it seems, were happy with the CBFC decision. Yesterday, they put out a picture of the cast of the film standing with the censor certificate and the caption made it clear that the CBFC has been lenient over the film. Interestingly, the first part of this franchise – Shubh Mangal Saavdhan – was based on erectile dysfunction and was also given a U/A certificate, that too without any cut.

The other release of the week is BHOOT: Part One – The Haunted Ship and this horror flick has also got a good deal from the CBFC. It was passed with no cuts and the Board only asked for relevant disclaimers in the beginning of the film. Its length is 1 hours 56 minutes and it is the second Karan Johar-produced film after Kurbaan to get an ‘A’ certificate. In short, it’s a great work for the moviegoers looking for some entertainment minus reckless censor cuts.