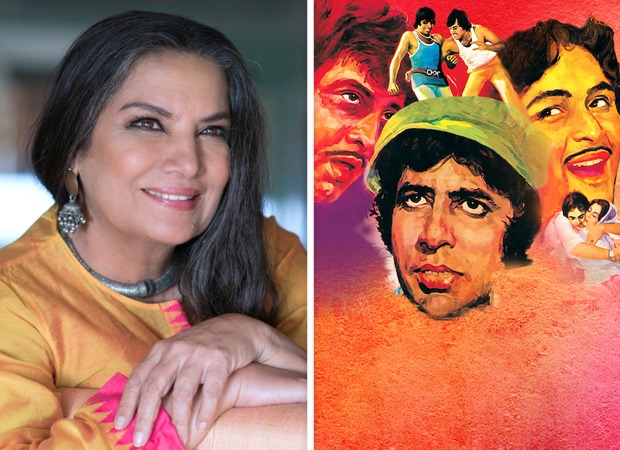 Shabana sheds some light on the 1977 double bill. “I had almost completed Parvarish with Manmohan Desai and had a blast. One day he came to my shooting at Ranjit Studio and said in his candid manner, “Shabbo I’m producing a film. Usmein there is no khaas role for you magar woh Vinod Khanna meri jaan kha jayega ki why is there no heroine opposite me when both Amitabh and Rishi have heroines!! Toh you please do the film for me!”

Shabana, who loved MKD’s cinema in spite of it being diametrically opposite to her aesthetics, readily agreed. “I almost fell down laughing and said yes immediately. We, that is Neetu, me, Vinod Khanna and Amitabh Bachchan were shooting Parvarish and AAA on 2 different floors of RK Studios simultaneously! MD and AB would flit from one to the other!”

Shedding light on the most famous sequence in AAA where Mr Bachchan does a drunken monologue with his mirror, Shabana says, “I watched AB giving 14 perfect takes of that famous drunken scene in AAA where he puts the plaster on his image in the mirror. He got it right each time but it was difficult for the camera because it was complicated. AB didn’t once express frustration. Then both hopped over to the next floor on the Parvarish set where the climax was being filmed. If you narrate this to a Hollywood star he would faint.”

Says Shabana, “Among his films, for Aa Gale Lag Jaa he always had a special corner for. He used to also cry buckets when he watched Mehmood’s Kunwara Baap. But we all had a ball shooting both Parvarish and Amar Akbar Anthony and he was totally convinced that AAA would be a blockbuster.”