Actor Rana Daggubati along with the team of Haathi Mere Saathi unveiled the Hindi teaser trailer and poster of his upcoming spectacle in Mumbai on Wednesday, February 12, 2020. The actor revealed that it was not an easy film to make. “I went back two years while watching the making. I’m a different man today because I was able to do all these things.” 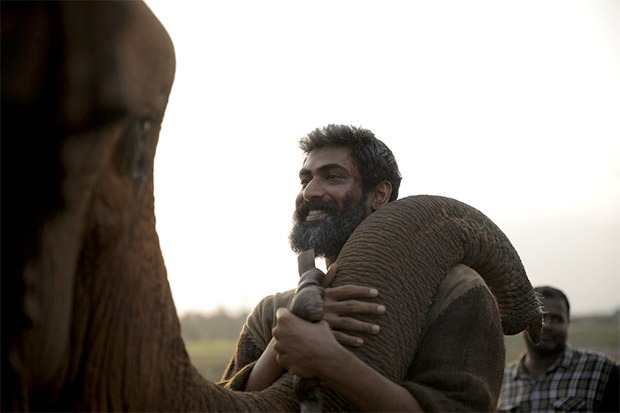 He further revealed that he had to shed 30 kgs for the film. “After Baahubali, when Prabhu sir met me, I was looking like a bull. He said we have to try and figure something else out. We started understanding how will a person be if he’s lived in the jungle for so long, what the nature of his food be and that’s the physicality we brought along,” Rana said at the launch.

“It’s a mirror to society. This happening in many parts of the country, the world. Everywhere there’s an elephant corridor and urbanization around. There are cities that grow and break the natural habitat. As filmmakers, artists, we have films to voice out certain things. To influence people in the most entertaining way possible,” Rana added.

Speaking about his experience working with Prabhu Solomon, Rana said, “Prabhu sir is a very successful director. He has made classics like Kumki, Kayal, and Mynaa. These are films where he has used his voice to tell stories of life in interior parts of the country. And if you see Haathi Mere Saathi, it is a much larger story he is trying to tell, and there is no better person to tell this story than him. As a human being, he has inspired me a lot. The way I look at life has become very different after this film, and I thank him for that.”

“The film is inspired by a person called Jadav Payeng, who single-handedly planted one lakh trees on the banks of the Brahmaputra. While I was doing a film called Kumki, I was researching, and I came to know about this man. It was really shocking to know that one man can make such a huge difference, and I was excited to meet him. He got a Padma Shri in 2015, and he was very close to our great Abdul Kalam sir. In a span of thirty years, he has single-handedly created a man-made forest. Thanks to this, wildlife has returned to the area. More than thirty elephants and more than five Bengal tigers are residing in the forest. He has done a great job but has not been recognised properly. So, I took his character and started creating Baldev (Rana’s character). That’s one portion of the plot, the other side of the plot I took from Kaziranga, where they encroached the forest area,” Prabhu Solomon said at the press conference.

“I collected these two real-life things and made the film, and it would not have been possible without Rana. I had made things very tough for him. It wasn’t easy to shoot in three languages in a tiger reserve. It was filled with scorpions and leeches, so it was dangerous for all the actors. But all my actors started to adapt. They were not artistes. They were real characters,” he further added.

Speaking of working with elephants, the director revealed, “We took 30 elephants to Thailand. It was a tough job for us. Handling 30 elephants for a 40-day schedule was a huge task. They were domesticated elephants, so we had to transform them into wild elephants.”

“More than movie-making, it was a learning experience. We learnt a lot through this film. We have learnt how important our forests are and why we should save our trees and animals. We should consider wild animals as family and not harm them. The elephants are some of the biggest contributors when it comes to growing a forest. Without them, our ecosystem would be gravely disturbed. We have 55 per cent of the global elephant population in India, and now that number is dropping, which means we have to save them now. We have not told this story in a documentary way. It is a commercial, entertaining film,” Prabhu Solomon said.

Haathi Mere Saathi originally released in 1971 and starred Rajesh Khanna and Tanuja. Rana said, “It’s really about animals and men being friends, and I think his (Rajesh Khanna) film was a tribute to that too.”