It truly is the year of BTS. After chart-topping album ‘Map Of The Soul: 7’ and English single ‘Dynamite’, BTS released their studio album ‘BE (Deluxe Edition)’ on November 20. Few days after release, the septet is now a Grammy-nominated artist. Their record-breaking single ‘Dynamite’ is nominated in Best Pop Duo/Group performance as they became the first South Korean pop artist to be nominated in the mainstream category.   The song was made during the pandemic which is a retro-disco-themed song that was made to spread hope and joy during these trying times. 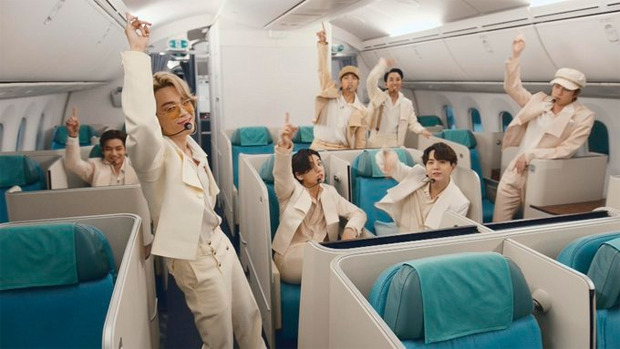 For their second night on The Late Late Show, BTS sat down with James Corden performed to talk about their nomination and performed ‘Dynamite’ right after receiving their nods. And the performance was nothing short of spectacular. Following the ‘Life Goes On’ performance, BTS took almost 100 steps further with stunning sets. Dressed in off-white suits, BTS performed on recreated airport sets depicting how they would flying to different places when things were better. Then, they arrived on the sets of The Late Late Show virtually as the replica of the set was an outstanding piece of work by their team.

Put up a hand if you’re doing this @BTS_twt choreo for the rest of the night. #DYNAMITE pic.twitter.com/Cb3aYeJCuc

Kicking off the weekend on a high note, the septet performed at American Music Awards 2020 giving splendid performances on ‘Life Goes On’ and ‘Dynamite’ followed by Good Morning America appearance and performances.

ALSO READ: BTS makes history after bagging nomination at Grammys 2020 with ‘Dynamite’, their reactions are priceless