Netflix has released the first trailer of its upcoming film, The White Tiger. Adapted from Aravind Adiga’s 2008 New York Times and Man Booker Prize-winning novel of the same name, the film stars Adarsh Gourav, Rajkummar Rao, and Priyanka Chopra Jonas in lead roles, and has been written and directed by Ramin Bahrani. Bahrani and Adiga are old friends, with Adiga even having dedicated The White Tiger (novel) to the former. 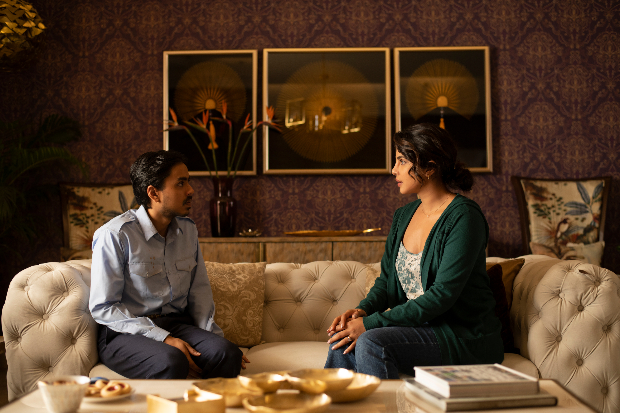 The first trailer showcases the class struggles in India. It is a story about Balram Halwai (Adarsh Gourav) who narrates his epic and darkly humorous rise from poor villager to successful entrepreneur in modern India. Cunning and ambitious, our young hero jockeys his way into becoming a driver for Ashok (Rajkummar Rao) and Pinky (Priyanka Chopra Jonas), who have just returned from America. Society has trained Balram to be one thing — a servant — so he makes himself indispensable to his rich masters. But after a night of betrayal, he realizes the corrupt lengths they will go to trap him and save themselves. On the verge of losing everything, Balram rebels against a rigged and unequal system to rise up and become a new kind of master.

Speaking about his experience of working in India, Bahrani said, “Working in India was a tremendous experience. Aside from a small handful of people, my entire crew was local. They were talented professionals who were kind, hardworking, and creative. They made The White Tiger a better film. I can’t wait to come back and make another one.”

Priyanka Chopra Jonas, actor and executive producer, said, “To bring this story to life for audiences around the world, as both an Executive Producer and a supporting actor, is my honor.

Working with Ramin was an immersive experience. Raj is such a prolific actor and Adarsh is one of the most talented newcomers I’ve worked with. It was amazing to have Mukul Deora and his team at Watchtower, and Netflix come together, and it is great to have Ava DuVernay on board as Executive Producer.”

Producer Mukul Deora added, “The White Tiger is a modern classic – an incredible story about freedom and the price people have to pay for it. The book is deep, dark and hilarious, and it got under my skin and compelled me to make this film. After securing the rights, I needed to find a director who would love the book as I did, and who understood it was both an indictment and a celebration of humanity. That person was Ramin Bahrani, who’s the body of work reflects a deep passion for people on the fringes of society. The book is also dedicated to him, so I knew that the intimate knowledge he had of the material would help tell this nuanced story. I then approached Netflix, who had just launched in India, because of their vision and ability to teleport stories from one corner of the world to another. They have been a fantastic partner who will give this universal story the release it deserves. I am honored to have worked with our fabulous team, and am really excited for the world to see Priyanka Chopra Jonas, Rajkummar Rao and our phenomenal discovery, Adarsh Gourav, bring this tale to life.

The White Tiger will release on Netflix in December across 190 countries globally in multiple languages.

ALSO READ: Priyanka Chopra to star alongside Celine Dion and Sam Heughan in Text For You