Shoojit Sircar’s directorial Gulabo Sitabo reunites the director with actors Ayushmann Khurrana and Amitabh Bachchan. Sircar has worked with Ayushmann in his debut film Vicky Donor and has directed Amitabh Bachchan in Piku and the unreleased Shoebite. Sircar also teamed up with writer Juhi Chaturvedi for this project with whom he had successful collaborations in the past including Vicky Donor, Piku, and October. In an exclusive conversation with Bollywood Hungama, National Award Winning writer Juhi Chaturvedi opens about the idea behind Gulabo Sitabo. 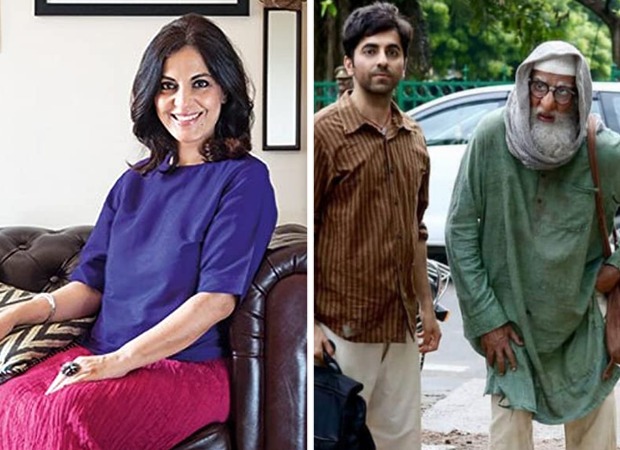 Juhi first came up with the idea of the film in January 2017 and discussed it with Shoojit Sircar. Talking about the inspiration behind Gulabo Sitabo, she said, “If you have seen all our films, more than the plot it is more about the documentation of people in a certain environment. We try to create a world that we have around us in our ecosystem. It may be an upper-middle-class family, it may be a middle-class family, or maybe hand-to-mouth existence and all of us are an outcome of where we live and how we live. Our thinking has a lot to do with where we grow up. Gulabo Sitabo is all set around a very hand-to-mouth existing set of people. You can make out that they are not financially good. So, in this kind of environment with these kinds of limited morality, they will make certain choices and decisions and without judging them, we’ve tried to capture all of that in Gulabo Sitabo because such people exist around all of us. We may not have interacted with them directly, as the way they are in the film but in different forms in different relationships in different strata of the society.”

The film is set in Lucknow and captures the essence of the city. Juhi said that her writing is based on observations of her surrounding and since she has grown up in Lucknow and did her schooling and college there, she knows this world really well. The characters in the film are an amalgamation of the different kinds of people she has seen around her. When asked if she had Ayushmann Khurrana and Amitabh Bachchan while writing the script, she said, “Ayushmann came in much later, but when we discussed the idea in 2017, Shoojit knew that nobody better than Mr Bachchan can do a character like Mirza. In February of 2017, even before the entire script was done, we had already taken him in confidence and shared the idea. He also got like two-three years of time. Mr Bachchan got enough time to think about the character and of course, he comes from around that area (Allahabad) so more than whatever I’ve written, a lot of input came from his own side. The authenticity with which he has played the character as you see in the film you will know that only a man from there can get that nuance. But for Ayushmann also, because he has already shot so many films in UP by now even though he is not from there people feel like he belongs there. So his experience of Lucknow from the last 4-5 years, about the cultural understanding that you have all that has added. He has also worked towards making his character so authentic whether it is the way of speaking or the look, the hair, everything. He has captured the essence of the character.”

Till now, all of Juhi’s scripts have been directed by Shoojit Sircar. Talking about the bond she shares with the director, Juhi said, “We are on the same page in terms of the vision of the film, and he has a point of view and if it is absolutely right, I make the changes. If he disagrees with me completely and I’m on the same page then I remove it. Ultimately, it is the vision of the cinema which for us is the most important thing. It only makes sense to work with like-minded people. I’m still with the same crew as I was in 2004 while working for ad films and now it is the same set of people who are making films. Of course, Shoojit is the head of the family, but the family members continue to be the same and I’m just one part of it. Everyone is heard and given their due.”

Gulabo Sitabo is the first Bollywood film to skip the theatrical release and opt for an OTT release owing to the prevailing situations. When asked if this decision will hamper the experience of the film, Juhi said, “The decision that has been taken by the makers is not very slippery, but they have thought through it. They’re all very experienced people and they have arrived at a decision to release the film on OTT. I completely stand by them because they are the biggest stakeholder. I am just a writer. What it means for Shoojit sir or Ronnie if the film is unreleased, that pain for them is far more. They have to further pay their people. It’s a very thoughtful decision and it’s fine. If these times require a decision, I am okay. I am happy that the film is coming out and everybody will stay at home and watch it.”

Gulabo Sitabo will be released on Amazon Prime Videos on June 12, 2020.

ALSO READ: EXCLUSIVE: Amitabh Bachchan on Gulabo Sitabo releasing on OTT platform – “The best way to survive is to embrace change, not fight it”