Back in February, BTS released their highly awaited fourth full-length album ‘Map Of The Soul: 7’. During the US promotions, they filmed the awaited Carpool Karaoke episode on The Late Late Show With James Corden that released few days after the album dropped. Now, three months later, James has unveiled unseen footage from the shooting and well, we are in for a fun ride. 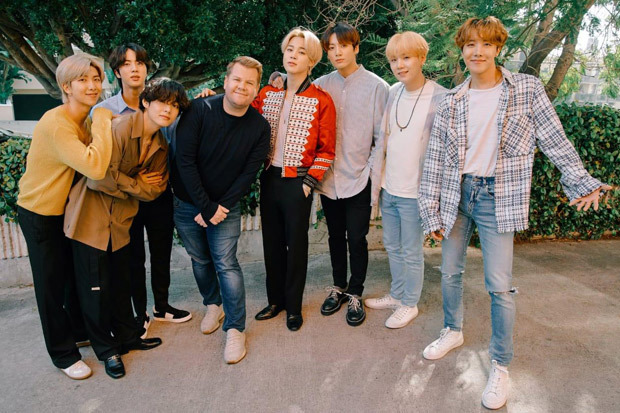 Specially dedicated to BTS Army after they raised over $1 million in just a day to match BTS’ donation to Black Lives Matter, James Corden applauded the efforts of the fandom to a very important cause. In the special video, James asks BTS about touring and whether they do impromptu singing during their travels. RM agreed to it stating they sing ‘Baby Shark’ and that gave rise to a new and fresh BTS Edition of ‘Baby Shark’ remix and did a mashup with ‘Shots’ by LMFAO ft. Lil Jon. The septet – RM, Jin, Suga, J-Hope, Jimin, V and Jungkook – was having a gala time!

The #BTSArmy has been doing some incredible work in recent days –so Papa Mochi got you a little gift! ???? pic.twitter.com/nnKdvQaKCg

The Carpool Karaoke episode kickstarted with their dance number ‘Mic Drop’, the members along with James jammed on this track before moving onto Bruno Mars’ ‘Finesse’ ft. Cardi B. This was followed by them crooning their title track ‘ON’ from ‘Map Of The Soul: 7‘ as Jungkook showcased his powerful vocals while singing the bridge part. The ended the Carpool Karaoke with Post Malone’s ‘Circles’.

BTS is set to host their seventh anniversary with a virtual concert “BANG BANG CON -The Live,” on June 14. They will release their Japanese album ‘Map Of The Soul: 7 – The Journey’ in July that has Japanese versions of their tracks and four new songs.