BTS members continue to tease about the new album they are working whilst we are still processing the last one! Ever since their tour has been rescheduled, the South Korean group has been interacting with fans via, live sessions on VLive or Youtube, Twitter with the hashtag #BTS_OF_THE_DAY or their app Weverse. 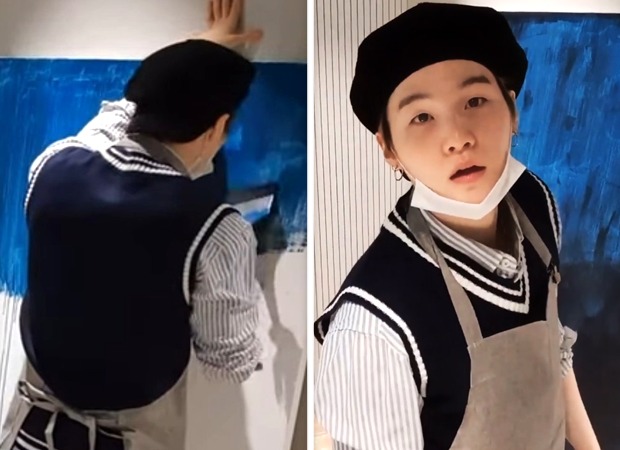 On Friday, Suga, who is a rapper-songwriter-producer, went live on Youtube which abruptly got cut off. He came online again and silently painting for half an hour before he actually started conversing during the live session. We need to see the end result as he has promised to share it on their social media.

During the chat, he confirmed that they are currently working on the new album and have discussed the roles everyone will be working on.

Yoongi mildly wonders whether he’s painting because he’s in a slump. “I can see why people paint now, though – it makes the heart feel – at peace. This was supposed to be the time we were on tour, but. (laughs)” pic.twitter.com/jKfr6MBU5C

Just a day ago, V also went live and spoke about how he is working on new music too. He even teased about his solo work and said that he will unveil it when it feels it has come out perfect.

Taehyung gave us a snippet of his new song. The way it sounds nothing like Scenery, Winter Bear or Sweet Night. His composing and producing skills are insane. It does give me Singularity and Stigma vibes. King of [email protected]_twt #Taehyung

“We’ve begun preparing for it. We’re going to be sharing that preparation process with you. No details have been decided as of now, we’ve only just started talking about it. That we’re going to be creating something new. We’re going to work hard to do that. We’re not sure when that album will be released. I’m sure there will be moments that we don’t want to show because the album making process isn’t always beautiful, but even though we don’t know what the end result will be, we’ll do our best,” RM earlier said. (translated by Soompi).