Dreams do come true for some people! Not many of us get to meet our favourite stars but when it comes to Soobin, leader and vocalist of K-pop group Tomorrow x Together, he is winning at fanboy life. The five members of the band TXT – Soobin, Yeonjun, Beomgyu, Taehyun and Huening Kai, interacted with singer and songwriter Bebe Rexha for a special Q&A session on Instagram. 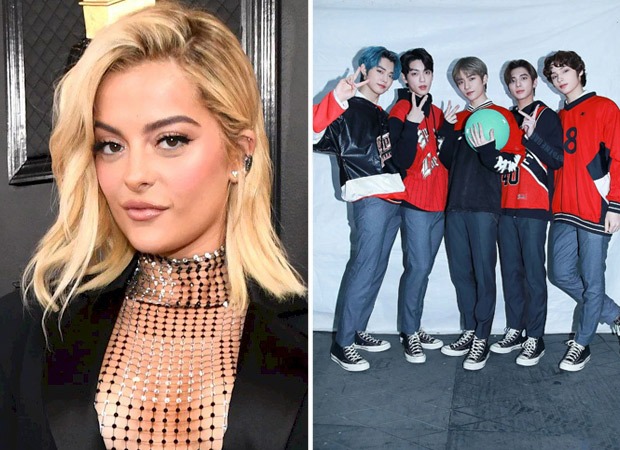 The quintet, from Big Hit Entertainment’s label, was live from Seoul, South Korea, whereas Bebe joined them all the way from Los Angeles. The six of them discussed everything from each other’s favourite music to social distancing amid this global health crisis and ways to connect with fans.

Soobin is known to be a huge Bebe Rexha fan. So when she asked him what his favourite song was of hers, he said, “I love ‘Meant To Be’ because it is a warm song with beautiful lyrics. When I hear it, it comforts me.” She was quick to respond, “My favourite song that I have been listening to recently is ‘9 and Three Quarters’. It’s just a bop which makes me happy and wanna dance. I love it so much.”

She said, “I am excited to meet you guys. I hope one day we could do a collab and it would be awesome.”

While speaking to Taehyun, she asked him, “I heard you love SHINee.” For unversed, the young singer wanted to become a performer because of SHINee’s song ‘Replay’. Interestingly, Bebe revealed that she wrote the song ‘Lucifer’ for the second-generation K-pop group when she was 17 years old. “I have the original version on my computer. It’s funny. I wrote it in English and then they changed the lyrics in Korean.”

Speaking of connecting with the fans, Bebe asked how TXT is keeping in touch with their Moas (fandom name). Huening Kai replied stating, “We usually use Twitter and Weverse. We see our fan’s comments. We usually communicate with Twitter.”

Bebe said she loves Korean barbeque and it is delicious when Huening asked her the question.

When Taehyun asked her what inspires her to make music, she replied, “I feel like I am really inspired by the things I am going through in my life – being in love, heartbreak and anything. Just normal life stuff.”

Quickly, she asked the boys where any of them had girlfriends as they responded in sync with a plain no while smiling throughout.

The boys teased about their upcoming album which might release in summer. Bebe suggested that she is also completing her album and needs a couple of more songs so maybe they could collab on it. She concluded by playing music for the boys.

“You guys I just met the TXT boys and they are so awesome, they are so sweet,” Bebe said on Twitter after the live session ended. “I played them a new song of mine and they loved it. It was awesome. Today was an awesome day.”

Since Soobin is winning at the FANBOY life with literal heart eyes, he forgot to ask her questions. So, he left a Twitter post for her and we hope Bebe responds. “I was so nervous and didn’t get to ask all the questions I originally wanted to, but here is one that we really wanted to ask…I really really love some of your unreleased tracks like ‘Cry Wolf’ ‘Kill Me Back To Life’ and ‘Human.’ Do you have any plans to release these songs in the future…?”

Here is the live session: