Arti Singh had put on 8 kilos in the Bigg Boss house and her recent transformation picture is going to blow your mind! In a span of one month, the actress has lost 5 kilos bringing back her abs as she bids goodbye to her flabs. In an elaborate post on Instagram, she shared her fitness story along with the before and after pictures of herself. 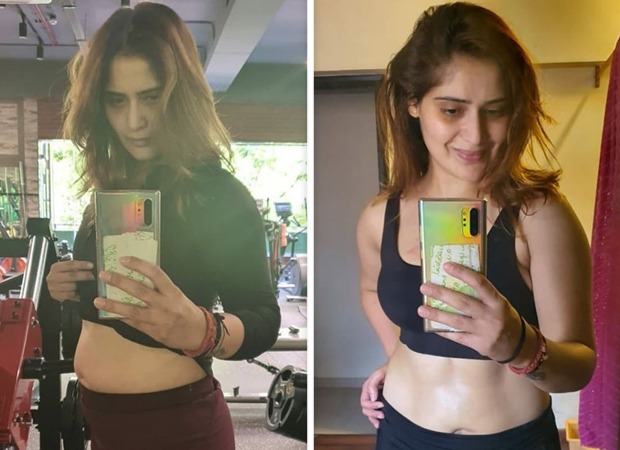 The caption reads, “Hey Abbie..(abs ) Finally now I can see you little little… you are surely on the way and coming very very soon! Till then for everyone here’s the first photo which was taken on the 15th of march and the other one was today..! I just want to say that I know it’s not the best but slowly and steadily I will get there soon. I have shed 5 kgs from the 15th of march till now. Aur aisa nahi hai ki koi pathhar tode! I am into 50 minutes of yoga and 40 minutes of brisk walking every alternate day. And definitely the biggest fight between all the exercises has been the late night cravings. Every night I feel like hogging maybe because of the boredom and also the stressful situation right now. And as you all might know, I am an emotional eater and that’s why I had put on 8 kgs inside the big boss house. Like everyone one I also have #CheatDay and you all won’t believe that on my birthday I ate so much, including chinese food that I was craving for. I dont kill myself by not eating what I want, so I do hog once a week. I actually salute people who are consistent with their diet! I wish I was like that but nevertheless I’m still getting there slowly. Thoda jyada time lagega… maybe one month more then all the people who are disciplined, but well that’s me and that’s fine. This is the time where you can actually try to improve yourself physically and mentally as well as also emotionally! Because zindagi ki daud se thoda aaram milega kuch logon ko isse!#MyFitnessStory”