You have seen and laughed your way through Chotisi Baat, Chasme Buddoor, Golmaal, Hera Pheri and Judwaa. But the directors of all 5 made other if not betters though less successful comedies during their ‘laugh’ time. Here is my list of less well-known comedies by the five mirth masters that can’t be missed. 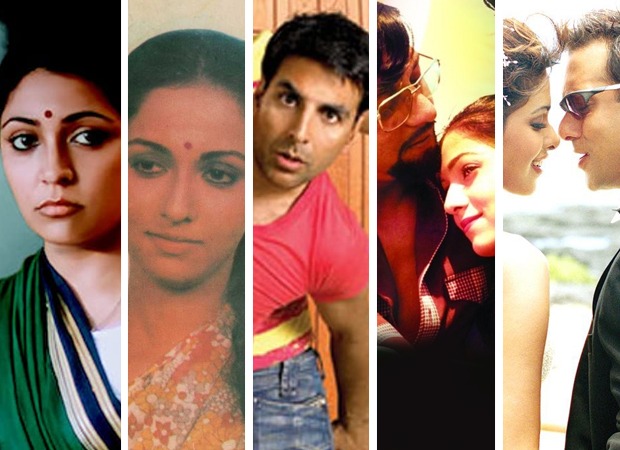 1. Katha (1983): Sai Paranjpye is rightly celebrated for Chashme Buddoorwhich set a new benchmark for burlesque and banter, and also gave Farouq Sheikh and Deepti Naval an opportunity to display their comic timing. But I feel Sai was far more confident with her laugh lines in Katha, a risible re-telling of the tortoise & hare fable with Farouq and Naseer playing against each other with remarkable ease and fluency. Deepti Naval was the chawl chick with a big flower in her oiled hair whom both actors wanted to win. What a pleasure to see Farouq cast as the wicked wheeler-dealer. Sai named him Basu Bhatt after filmmaker Basu Bhattacharya who didn’t allow one of her best film Sparshto release.

2. Naram Garam (1981): So okay, you love Hrishikesh Mukherjee’s Chupke Chupke and Golmaal. So do I. Both have their quota of cute amusement. And they both have a massive ‘fun’ following. You can go back to these two Ha-ha-thons from Hrishida innumerable times. But when you’ve had your fill, try Naram Garamwhich according to me, is a peppier, perkier, more tightly structured and warmly humorous follow-up to Golmaalwith an outstanding comedy act by Shatrughan Sinha as a goon with a heart of gold that melts when he sees Swaroop Sampat. And by the way a totally neglected music score by R D Burman here including Shatrughan Sinha’s self-sung Ek Baat suni hai.

3. Garam Masala (2005): The super-prolific Priyadarshan’s most well-known comedy is Hera Pheriwhere the chemistry among Akshay Kumar, Paresh Rawal and Suneil Shetty was a light-hearted highlight. But for me Garam Masala is the more tangy Priyan comedy. Akshay and John Abraham play two photographers who are incorrigible skirt chasers. And Paresh Rawal as their resident man-Friday is a laugh riot. Clearly this film sought its witty chops from Kundan Shah’s classic comedy Jaane Bhi Do Yaaronwhich I find to be grossly overrated. Garam Masala is as garam today as it was 15 years ago when it first came out.

4. Baaton Baaton Mein (1979): Basu Chatterjee may be synonymous with the laughter he created in Chotisi Baat. But that whole concept of Ashok Kumar as Amol Palekar’s love guru strikes me as embarrassingly ill-natured and sexist and not the least amusing. Chatterjee has made far better comedies. Even his lesser-known works like Safed Jhooth, Pasand Apni Apni (the first 30 mins of Aamir Khan’s Ghajiniseemed stolen from Basu’s film), Hamari Bahu Alka, Lakhon Mein Ekand Chameli Ki Shaadi were far funnier than Chotisi Baat. But my pick from Basuda’s dazzling oeuvre of droll fests is Baaton Baaton Mein. Set in the Catholic community of amchi-dumpty Mumbai it has delightful supporting performances by Pearl Padamsee and David. As two star-crossed love birds I’ve never seem a more mismatched pair than the lovely Tina Munim and Amol Palekar. Palekar looked as Catholic as Nasir Hussain (playing the Church priest) in Amar Akbar Anthony. The laughs come not only from the romance , some of which is beautifully shot in the local trains of Mumbai, but also from Chatterjee casting his favourite actor in one of worst cases of miscasting in Indian cinema.

5. Mujhse Shaadi Karogi (2004): David Dhawan did his most popular comedies with Govinda. But my favourite Dhawan comedy had no Govinda. Akshay Kumar and Salman Khan play hilariously against their public image—Salman is a god-fearing teetotaller, Akshay is the drinking fornicating hoodwinking rogue—to woo Amrish Puri’s daughter Priyanka Chopra. Kader Khan as Salman and Akshay’s blind landlord is uproariously funny. This is David’s most balanced comedy with a script that respects restrain more than anarchy.