When it came to range, Sridevi was in league of her own. She could play anything, from a martyr in Nazrana to the super-bitch on Judaai, from the child-woman in Sadma to the protective mother in Mom. But that apart I think no one in Indian cinema could match her comic skills. Check these out to see what I mean. 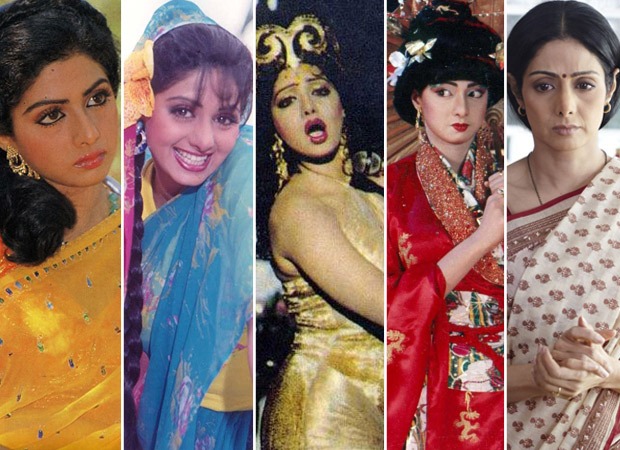 1. Bhagwan Dada:Who but Sridevi could play a hooker who plays hooky on duty? Sridevi entices potbellied lechers into hotel rooms and then gets them so drunk that they pass out before they can do her any damage. Then she wacks their money and flees. Sridevi was a scream as the pseudo-seductress blindly in love with Rajinikanth who played the title role. Bhagwan is okay, but the real Dada of the film is Sri. I remember mentioning how funny she was in this film to Sridevi and she had laughed over the fact that I actually remembered her in this film. Yeah, we remember every moment of yours even in your worst film Himmat Aur Mehnat.

2. Chaalbaaz: Playing the twins, or rather playing with the twins was child’s play for Sridevi and she made the sprightly twin a load of fun, drinking, gambling, and swindling everyone in sight and reducing the poor upright Sunny Deol to a speechless bundle of starry-eyed nerves. ‘Kissike Haath Na Aayegi Yeh Ladki’was the goofiest comedic song since Mr India. The trick, said Sridevi, was to create a double role that won’t be compared with Hema Malini’s Seeta Aur Geeta. Bang-on, Sri!

3. Mr India: Keep the rest of the film to yourself. Just give me the whole Charlie Chaplin in Mogambo’s den sequence. Sridevi as Charlie Chaplin was infinitely funnier than Taika Waititi’s Adolf Hitler in Jojo Rabbit (point of comparison: the moustache). Shekhar Kapur told me about the sequence: “It just happened. I thought of Sridevi in a moustache and I immediately thought she’d look nice in a moustache. When I told her about the Charlie Chaplin sequence she picked up all the Chaplin films and watched them all night. She did a perfect replication of Chaplin. I challenge any actress to do that sequence the way Sri did.” Another classic of comicality was the celebrated ‘Hawa Hawaii’song-and-dance where she turned gibberish into an art form.

4. Roop Ki Rani Choron Ka Raja: It may have been a box office disaster. But watch her in the song and dance ‘Chai Mein Chini’. She is funnier than she was in ‘Hawa Hawaii’. And there is this whole sequence where she played a paan-chewing Marathi woman shouting expletives on the road. That character had a life of its own. Sridevi had shared, “We worked as hard on this as Mr India, if not more. ‘Chai Mein Chini’ had me in Chinese makeup. Everyone was in splits on the set.”

5. English Vinglish: Though hers was a deeply melancholic part of a neglected housewife who sets out on a journey of self-discovery, Sridevi was exceptionally funny in the sequence where she does a Michael Jackson take-off for her demanding little son. From Charlie Chaplin to MJ, for Sri the sky was not the limit.